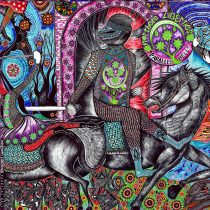 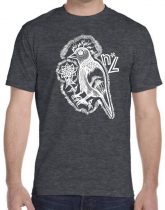 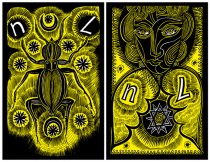 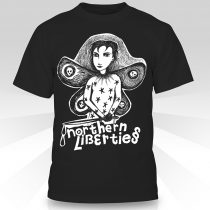 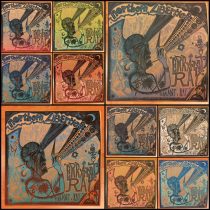 Details: Limited to 250 records.
150 on Black Vinyl
100 on Splatter Vinyl
Packed in screen printed jackets with insert. With cover art work by Justin.

Side A
1. Night Crept In
2. Falling Faster
3. Without a Trace
4. Haunted Cave
Side B
1. Consequence
2. No Way Through
3. Conspiracy of Sprit
4. Absent Pulse

Listen on the BC Page
Currently out of print 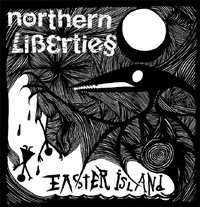 Details: Recorded Easter Sunday 2003
3 black test presses
500 copies on clear gold vinyl, but they came with the label reversed, So we had to send 50 copies back, We kept in the vault 450 copies. The pressing company replaced the entire order. 500 hand numbered copies on clear yellow released with cover, featuring Justin’s art and lyrics, printed in metallic silver ink on blue linen paper.

Side A
1. Easter Island
Side B
1. Chromosomatic

These records have the labels misplaced on the wrong side. They play just fine, just the labels are reversed. This version of this release has different covers. We ended up giving most of the misprints to distros…. But 205 are now available with the new/old cover. This cover is the first version Justin did for the 2003 release…. We used a different image then, but the original is back for this 2012 Misprint Release.

Details: Artwork by Justin Duerr. Screen printed by Kevin in White on a few colors of men’s shirts. Limited to 14 shirts. 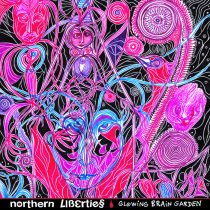 Details: Limited to 300 records.
100 on Black Vinyl
100 on Multi-Colored Vinyl
100 on Golden Marble
Packed in offset printed sleeves with insert. With cover art work by Justin.

Tracks:
Side A
1. Mnemonic Pnuema
2. Contact
3. Centuries
Side B
1. Maryanne of the Deep
2. Injected With Phenobarbital
3. Blueshifted Bluebird
4. Disfigured 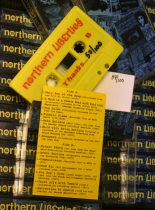